The Snow that Brought Chaos

* This post is quite outdated, actually. It happened in the mid of December 09. I should have written it a long time ago, but I didn’t have much time as I was having vacation with my family back in Saudi Arabia 🙂 .

It was on Friday, 18 December 2009. I felt so relief that it was my last day of university before the winter break. I was so busy that day, preparing for the end-of-year gathering with my Indonesian friends at my house — grocery shopping, cooking, cleaning, etc. It was a potluck; so each person has to bring some foods to be shared. We had a great time — playing UNO til late at night. But there was one thing that kept bothering me! The SNOW!

The thing was that, I had to head home (Jeddah) on Sunday (20 Dec) via Frankfurt Airport in Germany, which took about 4 hours by high-speed train or 7 hours by normal or intercity train. I decided to take a normal train because the ticket for the high-speed train was crazily expensive due to Christmas. With this normal train, I had to change trains for 5 times til I reached the airport. It was troublesome, but I had no choice. And I thought, it was a good way to enjoy the scenery. It was supposed to be a good journey had it not snowed!

I knew a week before that it was going to snow on the day of my departure to Jeddah. I kept on checking on the weather forecast hoping that the prediction slipped, but it never happened! It always told me that it was going to snow! Very heavily! You may wonder, why was I so panic? Well, the thing was that, snow fell in Eindhoven few days before that weekend. It didn’t snow THAT heavily but it already caused a total halt in the railway networks! People couldn’t get to work for days because of it. So I was really afraid of that. I was so afraid that some trains would be delayed or even cancelled — in which I could really miss my flight and spent my break miserably here. So, my only goal was to reach the airport ON TIME.

A friend of mine was so nice; she offered me a ride to the airport. But she later found out that her car needed to have snow or winter tires in order to drive in Germany in that weather condition. We could have just go without the special tires, but I didn’t want to risk it. It would be too dangerous to drive. If the snow fell so heavily, then we might even stucked in traffic for hours. So, with a bismillah and prayers from my family and friends, I decided to stick with the original plan: taking the train!

On Sunday (the day of my departure), I woke up early in the morning only to be freaked out that it was already snowing so heavily! At 7.30 am, I walked to the train station to catch the first train. Eindhoven was totally and entirely covered by snow!! I kept praying that no trains to the border of Germany were cancelled! If it happened, then I really needed to take a taxi which would cost me 100 Euros!!! (1.3 million Rupiahs to be precise :-S ) A German friend of mine told me that the German railway networks were excellent. As long as the snow didn’t block the train tracks, the trains would likely never be cancelled — although yes, delays might happened. So I really needed to reach the German border ASAP! Thank God, I could get into the border on time. You know what? I planned to read books and just relax on my way to the airport. But I just couldn’t freakin do it!! Gosh, I was so worried and I could feel my heart beating so fast! I kept looking at the snow. The sky was entirely covered by clouds and I knew that it wasn’t a good sign.

By the time I reached a small German city called Mönchengladbach, I started to get REALLLLYY panic. The snow was getting heavier and heavier that it would most probably blocking the train tracks in few hours time. So I decided to buy the high-speed train ticket from Cologne to Frankfurt Airport. And yes I had to spent like 60 Euros for that one-way ticket! I wasn’t happy at all, but I just wanted to reach the airport as fast as the light travelled!! And Alhamdulillah, I arrived in the airport at 3pm. At that time, the snow still fell so heavily to the point that I couldn’t see the planes (the visibility was only few meters!). Many flights were delayed. It was only at around 6pm or 7pm that the snow stopped falling and the sky was clear again. But still, my flight was delayed for 3 hours. Anyhow, I was really grateful that I reached home safely.

I’m not trying to exaggerate things; it was indeed so bad! Düsseldorf Airport (another German airport not so far from the Dutch border) was even CLOSED on that day! I was really really lucky, because I usually departed from that airport instead of the one in Frankfurt, because it was much closer to Eindhoven. But this time I departed from Frankfurt Airport. All three Belgian airports were also closed. My friend cancelled her trip to Italy because her flight was cancelled. Another friend of mine who were on the way for her vacation in Greece a day after my departure (Monday) got stucked in Prague because her flight was cancelled and then got transferred to the Frankfurt Airport and had to queue and wait for almost a day to leave for Greece! Imagine if I departed on Monday! I would have been stranded in the airport not knowing when to leave!

But these stories were nothing compared to more than 2,000 people stranded for 6-10 hours in the Channel Tunnel between France and England! Apparently, the trains broke down and these stranded passengers could do nothing but waiting to be saved. Can you imagine being stucked in an UNDERSEA tunnel??? You can only do two things: waiting to be saved or waiting to die. It must had been so frightening for these passengers!!!

Again… I was so grateful and felt so lucky to be back home with only few problems. Now I knew that snow could bring chaos to everyone!

The Queensland Floods & Can The Indonesians Learn from Them? 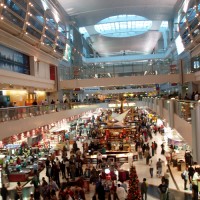