The Queensland Floods & Can The Indonesians Learn from Them?

You may have heard about the floods that devastated 75% of Queensland, which is about an area the size of France and Germany combined. It’s heartbreaking to say that Brisbane was badly affected by the floods. I lived there for 4 years until 2007, so the city had put a mark in my heart, somehow. There were a lot of beautiful memories that I remember fondly. It’s a beautiful city and some of my good friends live there. That’s why when I learned that Brisbane was going to be hit by a flood as severe as the 1974 flood, I panicked. I worried. I contacted my friends. I watched the news. I read the news. In fact, I watched and read TOO MUCH news.

But that’s okay. I can’t tell you how grateful I was to have access to the Internet: Facebook, Twitter, online local TV stations, online local newspapers, and all those forms. They not only kept me connected with my friends, but they also kept me updated with the latest news. It was as if I was in Brisbane, waiting anxiously for the water to rise. Or feeling sad when the iconic Drift Café drifted away because of the floods. Or watching in disbelief when the 300-meter section of our favourite Riverwalk was damaged and broken apart. Or cheering the tugboat driver who voluntarily steered the Riverwalk away from hitting the major Brisbane bridges. Or feeling so relief that the Brisbane River had peaked at 4.46 meters, more than a meter below the predicted peak of 5.5m. Or having a sense of sorrow when my alma mater, University of Queensland, was underwater (photo and video).

In addition to those, I got to indirectly “see” and “feel” how the Aussie government, especially the Queensland Government and the Brisbane City Council handled the disaster. For me, it was the first time to observe and keep a close eye on how things were organised there. I had been observing “quietly” of how the Indonesian government had been handling the disasters over the years and I didn’t have many things to say except to criticise. But then I didn’t have a “benchmark”, you know? I didn’t know how these disasters were supposed to be handled. I didn’t have something to be compared to.

First of all, just like Jakarta, Brisbane is a flood-prone area. The city lies on the banks of Brisbane River, dammed by the Wivenhoe Dam, which was built in response to the 1974 flood and is capable of holding twice as much water as the Sydney Harbor (or about 1 million mega litres). The dam has been protecting the city ever since, with the exception of the recent flood. Due to heavy rainfalls across the South East Queensland in the week following the disaster (thanks to La Niña), the dam could not hold much of the water. At one point, it reached 190% capacity, forcing the authority to release water to prevent the dam from failing. I can imagine the city would have experienced much worse flooding had Wivenhoe Dam not present!

In terms of preparation, Brisbane had been preparing for a possible major flood months or even years before it actually occurred. At least I knew that the Lord Mayor of Brisbane, Campbell Newman, had been campaigning for it, setting a number of measures to raise awareness about the possible flood and to make the Brisbanites (people of Brisbane) better prepared for the disaster, including setting up the Early Warning System. Australians are also equipped with its handful strong volunteers of State Emergency Service (SES), who provide services in case of emergency and disaster. So during an emergency situation, the Aussies know well who they should contact in the first place! See how much prepared they were in handling future disasters?

Not only that, two days before the flood damaged Brisbane, residents were widely informed about the much-awaited flood which was expected to be as severe as in 1974. The list of roads and suburbs that would be affected by flooding in Brisbane were released. Residents who lived in those areas were told or forced to evacuate. One day before the crisis, the entire Brisbane CBD (city centre) was closed. People who worked that day were told to go home early, as the swollen Brisbane River had caused a small part of the city to be flooded. At this time, residents were kept CONSTANTLY updated about how high the river would rise and at which time this would occur. In this way, people knew exactly what to expect. And the government kept warning its residents to expect the worst. So there were no surprises. Water didn’t show up into a house out of the blue. If you’re in the flood-risk area, you had to evacuate, PERIOD.

A number of supports during and after the flood crisis were given by the government. Besides the evacuation centres, the community recovery centres were also set up around the Brisbane area following the crisis to provide financial assistance, personal support, counselling, etc. to the Brisbanites. We could actually SEE that the government WORKED round the clock to make sure the roads were assessed for their safety and were opened immediately, public transports came back to normal, electricity was turned on, security was tighter to prevent looting, and the CBD was back in business after few days of inactivity! Seriously, who would complain having such a responsible government? Compare that to the Governor of West Sumatra who flew to Germany after Mentawai was severely hit by an earthquake and a tsunami. And to make the matter even worst, months after the disaster, Mentawai is still struggling with basic needs, many thanks to the corrupt government.

As most of you may know, social media had been used widely during the last year’s disasters in Indonesia. Some used it to spread essential information (e.g. @InfoBencana, @InfoMerapi, @SaveMentawai) and some used it to find volunteers and donations and distribute aids (e.g. @JalinMerapi). During the floods in Queensland, social media was and is still widely used too! But the difference is that: most of them were fully managed and run by the government! For example, the Facebook account of Queensland Police Service (QPC) had been very helpful for most Queenslanders as it delivered the most recent and most important information that you would find nowhere. The things that were posted there range from the roads that were blocked or were recently opened, the areas that began to be or were already flooded, calling for volunteers, other essential information or even simple reminders like these that were easily neglected by most people:

Police would like to remind people not to drive through flood waters, even in 4WDs! Please be sensible and use common sense

Can people please stop sightseeing along Kingsford Smith Drive. Water is rising quickly and they will become stuck if water cuts the road. There are currently up to 100 pedestrians there. Stay safe please!

The QPC even tried to bust some myths about the floods. Some of them were about the state of Wivenhoe Dam which was rumoured to fail and break soon, the Brisbane water that was rumoured to be undrinkable, and much more! Other government-managed accounts like @BrisbaneCityQld and the weather bureau’s website had played a great role in making sure the residents were well-informed.

It can be seen immediately how this disaster was managed and handled very well by the government. Besides Lord Mayor Newman, much of the credits must go to the Premier of Queensland, Anna Bligh, who had done a fantastic job!! Every day, THREE times a day (during the disaster), she held a press conference to let her people know the important updates of the floods, the list of things the government had done, their upcoming plans, and what people need to expect. She was not only able to manage the crisis across Queensland, but she was also able to keep the Queenslanders together during those tough times. In one of her press conferences, she emotionally reminded her people:

As we weep for what we have lost, and as we grieve for family and friends and we confront the challenge that is before us, I want us to remember who we are.

We are Queenslanders. We’re the people that they breed tough, north of the border. We’re the ones that they knock down, and we get up again.

This weather may break our heart and it’s doing that. But it will not break our will. And in the coming weeks and months, we’re going to prove that beyond any doubts.

Together, we can pull through this and that’s what I’m determined to do with your help, we can achieve it.

Compared that to the much famous speech of “Saya prihatin” from our “beloved” president! Who is more genuine and compassionate, seriously? Even Prime Minister Julia Gilliard was criticised during her joint press conference with Premier Bligh for being a poor actor with her clichéd, seeming stale, and overdone lines! LOL.

Premier Bligh’s efforts in building the community spirit post-disaster could also be felt through the establishment of more than 23,000 volunteers who helped cleaning the flood-affected houses, streets, and public spaces in Brisbane area alone. She and the other mayors kept on emphasising to volunteer and everyone responded to their calls. It was amazing to see it on TV! It would be more amazing to be there, I suppose! Even the volunteering effort was managed by the government by placing these people in different areas and providing them with transports. It seemed like every little thing that is deemed “unimportant” were taken care of and managed from the top down!

Overall, the Queensland Government, under the leadership of Premier Bligh, with the support and hard work of Lord Mayor Newman, as well as other mayors of the flood-affected areas across Queensland, have done a fantastic job before, during, and after the floods! And I have to mention that the Premier received praises from the public and media alike. The article from Brisbane Times not only praised her work but showed a staggering 84% of people who thought she actually did a wonderful job! Only 2% out of the total of more than 43 thousand voters thought that she did poorly. Wow, WELL-DONE Premier! Keep up the good work!

So perhaps our Indonesian government can start by being transparent of the things they plan to or have done before/during/after a disaster? This is what the Queensland Government has been doing, even until this day, which is to keep everything transparent to the public and keep everyone informed on what to do, what to expect, etc. Perhaps our government doesn’t want to be that transparent since they haven’t done enough job to make people impress anyway… *sigh*.

I hope the Indonesian government is aware that we’re currently experiencing La Nina and that means floods can hit any cities or towns there! It’s too late to say, but start planning perhaps? *sigh*

What can I say? I’m already sceptical about our government. As much as I want to have a slight hope on them, I have to accept the fact that we just have to deal everything alone without their help. I guess this is the worst conclusion I’ve ever made in this blog! LOL.

Last thing I want to say: Aussies still have a great sense of humour, even during difficult times! 😛

Note: Pictures were taken from several sources. Not mine!

The Snow that Brought Chaos 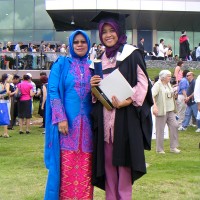