The minute we step into Sharaf El Islam Restaurant we know that this is indeed a perfect place to taste authentic Iranian foods. My host, Reza, recommended me this restaurant located right inside the Grand Bazaar of Tehran. The restaurant is packed with Iranians and the tables are arranged very close to each other. The place is quite narrow and it is quite tricky to find a place to sit. Saeede tells me that the foods in this restaurant would run out quickly by late afternoon, so going there after Dzuhur prayer is definitely a wise decision. We order an Iranian kebab and a saffron rice dish called tahchin. I really really love tahchin! It has a rich flavour and an interesting combination of sweet and sour. It is definitely a must-try Iranian food!

After lunch, we find our way out of the Bazaar and walk to the Golestan Palace, while arguing with Saeede who keeps on refusing to receive money for our lunch (yes, she paid for our lunch!). In the end, we give up and accept her nice gesture. The palace is only a few minutes of walking distance from the crowded Bazaar. I didn’t know what to expect from this palace. A magical palace at the heart of the hectic city seems to be impossible to find, but Golestan Palace is definitely exceptional.

It is hard to believe that the noise of crowds and Tehran heavy traffic vanishes as soon as you enter the garden of this grand palace. It is as if the palace itself absorbs all the noise. The garden is huge, filled with tall trees, ponds with no water, and fountains that stop working.

We walk from one building to another, while Saeede explains to us about the different facets of Persian history, from the Safavid era, Qajar dynasty, to the famous Shah. The palace is such an important witness to the Persian history. It was built during the reign of Safavid dynasty in the 16th century and later on, it was renovated and used for different purposes by different dynasties up until the Shah era. Ikmal seems to be familiar with all these Persian rulers mentioned by Saeede. Being oblivious to the Persian history, I, on the other hand, feel overwhelmed with all information being thrown at me. It is ashamed that I know absolutely nothing about it. I have a lot of things to catch up. I promise that I will be reading Persian history as soon as I complete this Middle East trip.

While Ikmal and Saeede are struck in a serious discussion on Persian history, Nabilah and I opt for taking pictures and admiring our stroll around the palace and garden. I realize that I need to pay extra attention to every detail in order to admire Persian architecture. I love the extensive use of symmetry in its design, the amazing mosaic tiles with intricate patterns, the stunning stucco carvings, and the beautiful mirrors and ornate windows. These are the sort of architecture elements that are unique to Persia/Iran and have become an inspiration to a lot of mosques and buildings around the world. I am no design-savvy, but I have no doubt that anyone visiting Iran will appreciate and admire the country’s unique and astonishing architecture.

The Abandoned US Embassy

After our palace tour, Saeede recommends us to go to one of the parks in Tehran. None of us has any places that we are interested to see and our train to Esfahan will only depart just before midnight, so we have plenty of time and decide to kill time in the park instead. We take a metro to Taleghani station, located only a few stops away from the palace. As soon as we get out of the station, I see a huge stretch of walls, similar to Berlin Wall, with different paintings. At one point, I thought that these were walls of graffiti art portraying Iranian culture and spirit. But in fact, these are walls of hate and propaganda, once belonged to the US Embassy until the infamous hostage crisis took place in 1979. Anti-American murals, from “Down with USA” to “Death to America”, are featured on these walls. The hostage crisis, which resulted in 52 Americans being held hostage for 444 days, practically ended the US-Iran relationship that once sprung during the Shah‘s period.

We continue walking along the long stretch of walls until we eventually reach Bagh-e Honar, literally “Garden of Arts”. This park is only one out of more than 800 parks that you can find in Tehran (Jakarta, are you jealous now?). It seems that Iranians love to spend time in the park: walk around, do a picnic, or even dating! Oh, speaking of dating, I spot some couples freely strolling around the park, but they don’t hold hands or kiss in public, of course! The religious police in Iran are not as strict and rigorous as the one in Saudi Arabia and according to Saeede, the police is much less strict compared to post-Revolution period, so there are still some ways for people to date and mingle around in public these days. This makes an arranged marriage, albeit still exists and being practised by some families, becoming rarer and uncommon. For Saeede herself, she has the freedom to choose whoever she wants to marry, although she admits that arranged marriage is not something that she would oppose.

Our conversation becomes more interesting as the day goes by, ranging from Iranian culture to religion. After only a few hours of meeting Saeede, I realise that we have so much in common. The way we think, argue, and our interests are just in sync. She is the first CouchSurfer that I feel so connected with, thus our conversation flows naturally and never stops. She is very smart, friendly, down-to-earth, open-minded, and most importantly, she likes to see and understand things from different angles — which makes our discussion more fruitful. I am glad that I contacted her to be our host for today! It is a pity that we only have one day to know each other. I wish I can stay here a bit longer.

The sun has set not long ago and it is time for us to leave. Nabilah and Ikmal are going back to their hotel to pick up their backpacks, while I am going back to Reza’s house to pick up mine and bid farewell to Reza’s family. We will reunite again at the central station to catch a night train to Esfahan. Saeede accompanies me until the metro station nearest to Reza’s house and ensures that I take the correct shared taxi. Not everyone speaks English here, so having Saeede by my side while I am in a rush is definitely life-saving. Tehran traffic is even worst during rush hour and I am worried that I may not be able to make it to the station on time. Thanks to Saeede, who managed to explain to the taxi driver where to get to my destination, I arrive at Reza’s place safely. Reza is still at work, so I am greeted by his parents and sisters who insist that I should join them for dinner. But I only have little time and I have to say goodbye. To my surprise, Reza’s mom gives me a dinner box so I can have dinner on the train. So sweet of her! I’m so touched!

On my way to the train station, I sit back on the bus, trying to catch my breath after walking and running with my heavy backpack. I am trying to recall what I have done today. Too many things happened within the short amount of time that I have in Tehran. I have just left my new family that I have come to know. I will never forget the genuine kindness and hospitality of Reza and his family. Despite the fact that I am not able to see Reza again before I leave Tehran, Reza has been in contact with me all the time via phone, making sure that I am safe. His parents are just so welcoming and they really make me feel like I am home. Mansour has been very helpful too; he was the one I would contact to ask for directions, which public transport to take, and so on. Saeede is such a sweetheart; I learnt so many things about Iran from her. Tehran would not be memorable without all of them. I am so grateful that I got the chance to meet them and I hope that I will see them again someday, somewhere.

The Kindness of Strangers

The bus has stopped at its final destination. I look around and I don’t see any signs of train station nearby. Good thing I asked Reza’s sister the Farsi word for “train station”, otherwise it would be hard for me to find anyone that can speak English. I ask a stranger on the street where rah ahan is and she tells me that she’s going there too. Wow, perfect! I follow her and her daughters. We try to converse using a combination of English, Farsi, and sign language, occasionally having an awkward silence. After walking for few minutes, we finally arrive at the train station. Before I say goodbye, she asks me if it’s okay to take pictures with me (!!!).  Of course, it’s OK!!! Let me set this straight: I never had strangers on the street asking me to take pictures with them. This is new to me! 😀

As soon as I am reunited with Ikmal and Nabilah, we hop on the train car straight away. The night train from Tehran is a sleeper train with 6-berth compartments. We depart slightly before 12 AM and will arrive around 6 AM in the morning. Now that I have an awesome experience in Tehran, I can’t wait to see what Esfahan can offer. I don’t know what to expect of this city, but I am excited, hungry for more adventures 🙂

Next post: Middle East Trip: Esfahan – Half of the World 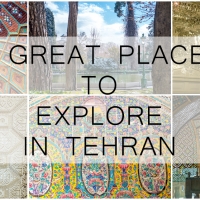