Our tour around the Imam Square continues to Ali Qapu Palace, which is, unfortunately, closing earlier than we expected. This used to be the place where Shah Abbas entertained his noble visitors and foreign ambassadors. It seems unfair to compare any palace with Château de Versailles, but I just can’t help it! Versailles is so magnificent that the first thing that comes into my mind when the word “palace” appears is, of course, the Palace of Versailles. But in terms of size, details, and amount of paintings it has, Ali Qapu Palace is nothing like the Château de Versailles.

There is one room in this palace that impresses me the most though, i.e. the so-called music room. Located on the sixth floor, this room contains intricate niches in walls depicting shapes of vases, which produce echo sounds. Back then, music performances by various ensembles were done here. A stranger comes to tell us that vases belonging to Shah used to be placed on those walls, but they were eventually stolen. I am too mesmerised with this artistic room that I don’t even bother to verify that story 🙂

On the upper level from the music room, we can see the beautiful view of the whole Square. Too bad that some parts of it are under construction and that we can’t stay here longer than we expected as the palace is closing its door soon.

We stroll around the Imam Square once again, occasionally taking a break and observing strangers that pass by. In the middle of the Square, we see a group of cute elementary school kids who are having a picnic. They wear their school uniform, complete with the headscarf. Their teachers are kind enough to allow us to take pictures of them and before we know it, we are being surrounded by these cute girls! They are very eager to talk to us, but having a hard time to speak their mind in English. They try their best though!

After spending some time with the kids, we then go for lunch at Bastani Traditional Restaurant, as recommended by our host Majid*. This is one of the two most famous restaurants in the area of Imam Square, being frequented by Iranians and tourists alike. As usual, we order some foods recommended by our host, including kashk-o-bademjan, biryani, kofteh, kebab, and Iranian yoghurt drink, doogh. The foods are superb and the restaurant has a great ambience, with a small fountain in the middle. We stay here for quite a long time; chilling, chatting and smoking shisha at the same time (not me, though!).

Our plan in the afternoon is to meet another CouchSurfer, Hamid, that I have contacted earlier. Hamid promised to show us around Esfahan today. We meet him at the entrance of the Imam Mosque. My first impression? He is such a funny guy! He jokes and laughs with us, albeit with his not-so-perfect English. He claims that he lives in the most dangerous place in Iran, due to its close proximity with one of Iran’s nuclear plants. If the US decide to bomb the plant, his house would probably be destroyed as well :D. He tells us his experience going to Afghanistan and Tajikistan — two countries that seem to be off limits to me due to either war or visa restrictions. I would love to visit those places one day!

Exploring Tehran with a Pickup Truck

Suddenly, Hamid has an idea. Let’s explore Esfahan with my pickup truck, he says. Ikmal, Nabilah, and I exchange glances before all of us scream with excitement. Yeah, why not?! Despite the fact that all four of us have to cramp into such a small truck, we like the idea of wondering around and expecting nothing but randomness. Driving around busy Esfahan roads is not as bad as Tehran’s roads. A few traffic jams here and there, but it’s still acceptable. We stop in front of a shop, nearby a bazaar, which I can’t recall its name. Somehow I get used to Persian cities now. A bazaar, a big mosque, and a square. You’ll find a similar setting in Europe, where instead of a mosque, it has a big church.

Hamid brings us to this shop where everyone working there seems to know him very well. It turns out that they are all Afghanis, working in Iran to get a better life. There are many Afghan migrants and refugees here in Iran; perhaps due to similar culture and language. Some of them manage to get a job here and lead a good life. But some are not too lucky; they depend on NGOs and perhaps Iranian government for help. Here I meet Afghanis who seem to live an OK life, which is probably much better had they lived in their own war-stricken country.

Restriction in the Mosque

Once the tea is consumed, we bid farewell and Hamid shows us around the small bazaar and mosque. Like all mosques in Iran, you can enter them without removing the shoes. Iranians would tell me that this is what makes the “Shia mosque” and “Sunni mosque” different: you can stroll around the mosque with shoes on, merely because carpets are not laid on every part of the mosque. When I was at Imam Mosque, all carpets were folded and I didn’t see anyone praying. However, in this particular mosque, I can see a small door which leads to a huge hall with carpets on — something that I didn’t see in the earlier mosques I visited. As soon as I was about to enter the hall, a man shouts at me and says something in Persian that I have no idea about.

Majid talks to this man, who looks like a Shia religious cleric you often see on TV. Apparently, I am not allowed to enter the hall without a chador. I need to wear a chador to enter a praying space. I remember entering a praying space in Tehran’s mosque and I didn’t have any trouble with that. I’m not sure why I’m not allowed to enter without a chador, when I’m actually wearing a proper headscarf, unlike many Iranians out there.

Before maghrib prayer, Hamid fetches us back to Majid’s house, where we’re staying for the next two days.

* Name is not real

Next post: Middle East Trip: Our Host in Esfahan

Previous post: Middle East Trip: Esfahan – Half of the World 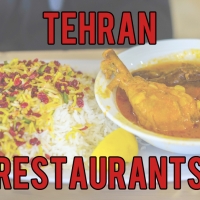 4 Local Restaurants You Have to Try in Tehran, Iran