I escaped the snowy Eindhoven and spent my winter/Christmas break this time in the sunny Saudi Arabia. It had been 2 years since my family and I hadn’t had a vacation with the complete members; it’s either I wasn’t there, or my sister wasn’t there. That’s why this vacation was quite exciting as all of us reunited again. And I wanted it to be a bit different than usual, so we decided to go to somewhere nice that we hadn’t been before. This time to a place everyone had been talking about: Madain Saleh.

Madain Saleh (or also known as Al Hijr) is located about 20 kilometers from a small town called Al-Ula, about 8 hours from Jeddah or 4 hours from the city of Prophet SAW, Madinah Al Munawwarah. It lies between the cities of Tabuk (northwest of Saudi Arabia) and Madinah. It bears a unique testimony to Nabataean civilization — the same people who built Petra, which is Nabataean’s capital city. It has been one of the most important historical and touristic sites in the Kingdom; however, it was not until the year 2008 that Madain Saleh became Saudi Arabia’s first UNESCO World Heritage Site.

Evidence of human settlement in this region dates back to the most ancient times. This includes the Thamudic inscriptions found on the site. Al Hijr, according to the Qur’an, was the site belong to the Thamud tribes — inhabiting the site in the third millennium BC. The people of Thamud were blessed with great wealth, yet they were very arrogant and they oppressed the poor. They also worshipped idols. Allah SWT decided to send Prophet Saleh AS whom they respected to warn and told them to worship Allah SWT and that they had no other gods but Him (Al Hud:61 & Ash-Shu’ara:141-158). However, these Thamud people refused to believe and obey what Prophet Saleh said and ordered them to do, so Allah SWT provided them a miracle by turning a huge rock into a pregnant she-camel who had the milk available for all people of Thamud. But instead of taking care of this camel as instructed by Prophet Saleh (Al Qamar:23-29), they slew the camel and told Prophet Saleh to bring (the punishment/warning) that he promised to prove them that he was indeed the messenger (Al A’raf:77). Three days later, Prophet Saleh’s warning came true and the Thamud people were destroyed, being struck by an earthquake and lightning blasts (Hud:67-68).

Besides the people of Thamud who occupied the site in the 3rd millennium BC, the Nabataeans also settled in Madain Saleh, which later became their second capital (after Petra) between 1st century BC and 2nd century AD. The site lies in a strategic position on one of the most important ancient trade routes, which made Nabataeans known traders for incense, spices, and aromatic plants. They were also well-known for their skill in collecting and storing rainwater — more than 150 wells and a number of water reservoirs have been found in the site.

Apart from being renown traders and masters in hydraulic techniques, the Nabataeans were also experts in the art of rock carving. More than 131 rock-cut tombs found in the site. These tombs have two main types: the rock-cut tombs with varying decorated facades (mostly falcons and snakes & showing Egyptian, Assyrian, Greek, and Roman influences) and carved in the rock; and the tombs that were simply cut into the surface of the rock (called pit tombs), which are covered with sandstones slabs. These two types of tombs show the social status of the owners of the tombs; i.e. the wealthy people could afford the decorated tombs, whereas the modest people could only have the simple pit tombs.

In 106 AD, Madain Saleh was taken over by the Romanians and the site lose its strategic importance when the trade route was changed between the south and north of Arabian Peninsula to the Red Sea. The Ottoman Empire built a fort in Al Hijr from 1744 to 1757 to protect the pilgrimage route to Mekkah. Between 1901 and 1908, the Hejaz Railway was also built in Al Hijr by the Ottoman Empire in order to link Damascus and Jerusalem to Madinah and Mekkah. This railway had been abandoned for a long time and is now turned into a railway museum.

I felt so lucky to be able to visit this site. It was AMAZING and BREATHTAKING. As soon as we were about to reach Al-Ula, we could see beautiful cliffs with different and unique shapes (as if all of them were carved); some were very huge, some were small. It was even more beautiful when we reached Al Hijr itself. It felt different to be there. I felt like I wasn’t in Saudi Arabia!! I was impressed, even to the moment I wrote this post 😀 .

One annoying thing about traveling to this beautiful site (and almost all other interesting places in Saudi Arabia!!!) is you need to acquire a prior permission from the government in order to have an access to these places. At that time, my dad was misinformed and some Saudis actually promised him that they could take care of the permit. Eventually, these people gave up as they couldn’t get the permit on time (as expected!!!!). But we went to Madain Saleh anyway, hoping that we could get in. After few minutes of negotiation, the guard allowed us to get in (God bless him, seriously!). It was already 4pm when we entered the site (coz we waited for almost the whole day for the permit to be issued from the person who promised us!), so we did everything in a hurry! We also couldn’t get a guide tour who could explain about the history behind it as everything was uncertain (i.e. whether or not we could get in!). Certainly, exploring Al Hijr for two hours wasn’t enough and there were too many things to see! The whole Al Hijr site was so massive (1621 hectares to be precise) and we needed to drive a car to see different tombs. But I felt so grateful that we were allowed to get in and see those beautiful tombs, otherwise we had to go back with empty hands!

Besides Madain Saleh, we had the chance to visit Al Ula Castle, which was built in 6th century BC to protect the Old Town. The area of the Castle is 180 sqm and is 45 meters high above the town level. It had such a beautiful view from the top! The town itself consisted of more than 800 houses built attached to each other, forming a fortification around the city. Across the Castle, there was an old mosque; which was believed to be the mosque where Prophet Muhammad SAW stopped and prayed on his journey to Tabuk.

For those who are interested to visit Madain Saleh, I’d recommend to start your journey from Madinah. My family and I stayed in Madinah for a night before we continued our trip to Al Ula early in the morning. We then went back and stayed for another night in Madinah. In my opinion, a whole day of exploring Madain Saleh is enough, but if you think you need more time, then you can stay in one of the two hotels in the town. The best time to visit the site is definitely in December or January (this is considered high season!), when it’s a winter season in Saudi Arabia (well, winter means 20 something degrees Celsius :D). I can’t imagine going there in the summer (and I strongly don’t recommend it!), as it’s too hot and the temperature may rise to 50 degrees Celsius!

How about the permit? And the visa? Well, the permit can either be obtained from the Saudi government, a tourist agency or one of the hotels in Al Ula. It’s better to apply for the permit way in advance. Please notice that even though you have an Umrah, Hajj, or tourist visa, you still need a permit to visit Madain Saleh. Also, bear in mind that this country is quite complicated and uncertain; so even though you hold a permit, there’s a small chance that you’ll be denied an entry! From what I heard from others, it is possible to get a permit for those who hold Umrah or Hajj visa, however, it’s still very hard to get it. And the fact that Indonesians are very famous in Saudi Arabia for running away and staying illegally in the country, that means it’s even harder for us to get a permit 🙁 . How about tourist visa? Well, tourist visas can only be obtained by certain number of nationalities (including Europeans, Americans, Australians, Malaysians, etc), but NOT Indonesians.

Anyhow, despite of everything… Madain Saleh is the place worth visiting and it remains one of my favorite places in Saudi Arabia, after Mekkah and Madinah. I really want to go there again some day.

* You can see some pictures in my Picasa or explore other people’s pictures here.

Plan Your Visit to Kerman, Kaluts, Mahan, Rayen, and Bam – with useful tips! 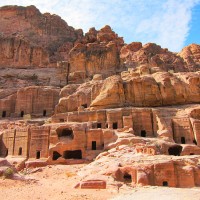