Sulawesi: Getting to Tanjung Bira

South Sulawesi is known as the island of the most notorious and legendary seafarers among Indonesians. From Australia, Malaysia, the Philippines, Cambodia, all the way to Africa, the ancestors of Bugis people were historically known to have set their foot there and forged trading links with these coastal communities many centuries ago.

Sulawesi is also the birthplace of pinisi, a traditional wooden sailing ship that has been a pride for Indonesia. Legend has it that the vessel was first built by the Crown Prince of the Luwu Kingdom who used it to go to China to marry a Chinese princess. On the way back to Luwu, huge waves destroyed and cut his ship into three parts, which eventually made their way into the villages of Ara, Tanah Lemo, and Tanjung Bira. The villagers managed to collect the pieces of the destroyed ship and built them into a boat, which is then called pinisi. Historically, pinisi was first used for transportation by the maritime kingdom of Gowa Tallo as early as the 15th-16th century. It was at Tanjung Bira that pinisi ships were first crafted. Since then, the people in Bira have been known – up until now – to have the most skilful hands, mastery and craftsmanship to build a pinisi.

Its rich historical and culture backgrounds were not the only thing that drew me to Sulawesi. Half of my genes originated from here, so I made a point that I would visit and explore this place one day. My dad’s paternal great-grandparents were originally from Bone, South Sulawesi. One day, they made a voyage out of Sulawesi and ended up in Kijang Island, Riau. My dad was born there and spent most of his childhood on the island. Eventually, the whole family moved to Palembang, South Sumatra, and made this city as their permanent home. Throughout his life, my dad never visited Bone. He had only set his foot in Sulawesi once in his lifetime. I always wondered why he never talked to his children about the island where his ancestors originated from. Or why he never wanted to go back again and explore his roots. Or why he never taught us how to speak Buginese. Unfortunately, the answers were kept to himself and they were buried with him when he passed away a few years ago. Could that be a sign why I had to visit Sulawesi? Probably!

My ancestors from my mom’s side were also Buginese. Rumour has it that they sailed to Batavia all the way from Sulawesi, settled, and married the locals of Batavia. Their descendants eventually married people from different ethnicities – Arab and Chinese. The final product of such union is people with different facial features being lumped into one huge family. Some of my relatives have darker skin than others, some have small eyes, some have a pointy nose, some have big eyes, and some have light skin. Being the creole ethnic group of Betawi, such striking differences are not to be frown upon as there are no such things as typical Betawi looks. I am very proud of my multicultural backgrounds!

To me, visiting South Sulawesi was about discovering my own roots. It was about getting to know small pieces of my family’s heritage that may be lost in the mists of time. I wanted to see the land of my ancestors and be proud of it! 🙂

Taking a Bus to the City

We arrived in the sunny Makassar, the capital city of South Sulawesi, located in the southwestern tip of the island. We decided to take a DAMRI bus from the airport to the Lapangan Karebosi (Karebosi Field) in the centre of the city. The fare was less than 30k Rupiahs per person – it was the cheapest transport option if you are not in a rush and do not travel in a big group. The operational hours of the bus are between 7 AM to 8 PM. Avoid taking a bus during rush hours as you would be stuck in a traffic jam for an hour or more! That’s what happened to us when we took the bus the second time after we landed in Makassar from Selayar Island. We would save a lot of time by taking a taxi instead. I would recommend taking Bosowa taxis as they are known to be reliable among the locals.

After about an hour, we reached Lapangan Karebosi at 12:30 pm. We had a quick lunch at Sop Konro Karebosi Restaurant; located within a walking distance from Lapangan Karebosi and rated as the 5th best restaurant in TripAdvisor.  I had to disagree with the rating though, as the ribs and soup were cold. It was a mediocre meal and I had the impression that Daeng Naba Restaurant in Jakarta was far much better than this one!

I left the restaurant feeling disappointed albeit reenergized after the whole day on the plane and bus. The cashier lady at the restaurant told us that a red pete-pete or angkot (minibus) to Malangkeri Bus Terminal passes by the street where the restaurant was located. So all we had to do was to wait in front of the restaurant and the pete-pete arrived in less than 5 minutes. In order to go to Tanjung Bira, we had to take this pete-pete (costing 5k Rupiahs per person) and catch a jeep or a car from there to the south-eastern tip of Sulawesi. Since we were on a budget, renting a car was definitely not an option at this point.

Cramped into a car to Tanjung Bira

As soon as we arrived in the Malangkeri Bus Terminal, an SUV driver approached us and offered us a steep price for a trip to Tanjung Bira. After some series of negotiations and dramas, we managed to lock in the price for 230k Rupiahs for two people. With that price, he was willing to make a one hour trip from the town of Bulukumba to our accommodation in Bara Beach. It was not the cheapest price that you could bargain here, but it was quite a good deal. We didn’t have much bargaining power as it was getting late and we didn’t have much time to ask around anymore. So we decided to go with this car.

The minute my husband and I sat in the back of the car, the driver told us to squeeze a bit more so that another person could sit with us. I was literally flabbergasted! We already had 3 people at the back (us and one other person) and he was going to squeeze us some more?!? I was quite angry and I told him that I already paid 230k – it’s quite a lot for him. Why did he want to add another passenger? I threatened him that I would rather find another car as I was not willing to sit in an uncomfortable arrangement for 6 hours straight. He got scared and became soften a bit. Eventually, after some arguments with other passengers sitting in the middle, he managed to convince them to add one more person. The final sitting arrangement was surreal: 2 adults and 2 small kids in the front seats (including the driver), 4 adults in the middle seats, and 3 adults in the back seats. In total, we had 11 people cramped into a SUV. What an experience on our first day in Sulawesi!

As we drove out of the capital city, we passed by a number of villages with background views of green rice fields on both sides of the roads. There were silhouettes of mountains on the far north, which was perfect for pictures! Unfortunately, we were not able to stop randomly anywhere as I would have taken few pictures. Halfway through the journey, we witnessed arrays of rice fields that were all destroyed due to the dry season. The fields were submerged in water (due to the recent few days of rain). It was a tragic scene and I couldn’t help but think of poor farmers who might not have money to survive until the next season.

We finally arrived 5 hours later in the main town of Bulukumba, the capital of Bulukumba Regency where Tanjung Bira is located. All of the passengers got off here. Despite our arguments earlier, the driver turned out to be very patient and kind-hearted. He would always get out of the car to ask for directions (even though he could ask for his car!! Talk about politeness!). He was also willing to go to each passenger’s final destination to ensure they safely arrived. The last passenger, though, was a headache. She and her mother travelled all the way from Parepare – a 3 hours drive city from Makassar. They did not know where the exact location of their relatives. So in the end, we spent so much time trying to trace their relatives who couldn’t be contacted. I was super pissed at that time and I couldn’t comprehend how this could happen! It’s already 9 PM at night and I wonder how long more we had to wonder around?!

Thankfully, we managed to find the village in Bulukumba where their relatives were located. So after more than an hour, we finally headed for Tanjung Bira!

It took us another one hour to reach Tanjung Bira and another 15 minutes to go to BaraCoco Bungalows, where we were going to stay for 2 nights. The owners, Jan and Rahel welcomed us with open arms. Rahel was even willing to cook dinner for us as we were so hungry and didn’t know where to eat. Jan is a Belgian guy who is married to a local Torajan. He was travelling around Indonesia when he met Rahel and decided to marry her and build a beautiful accommodation at Bara Beach.

He showed us our room – a nice bungalow with huge semi-open toilet/shower. It’s such a cosy bungalow. Oh, we definitely couldn’t wait to see the view tomorrow!

Next post: Bara Beach: the Ultimate Destination of Tanjung Bira 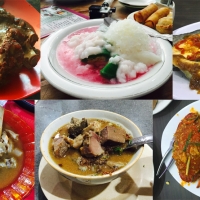 Makassar: 5 Halal Foods You Must Try