There are not many things you can do in Jeddah. If you are obsessed with shopping, Balad and Tahlia are your destinations. If you love the beach, you can walk along the Corniche Road or rent a private villa in Obhur. If you are a food lover, you can try a different kind of Arabic foods and smoke shisha in the middle of the City or beside the Red Sea. Or if you like being in a desert, you can go on a desert adventure and explore the vast Saudi Arabia’s desert.

Although it is quite boring (because I’m a “mountain” person), Jeddah is a unique city. According to Wikipedia, the city has “the largest open-air art gallery in the world.” There are many sculptures and modern artworks with different kind of designs, themes, and materials. Works by international sculptors from Henry Moore, Arnaldo Pomodoro, Jacques Lipchitz to Joan Miró are publicly displayed along the Cornish Road beside the beach and in every roundabout across the city. Wanna have a look?

This one is the famous Bicycle Roundabout (Maidan ad-Darrajah). The 15-meter bicycle, created by Julio Lafuente, is located around Sitteen Street. All Indonesian pilgrims refer it as ‘Sepeda Nabi Adam‘. I have no idea how the rumour first came out, but don’t take it seriously! 😀 It’s obviously not true.

There’s also a beautiful giant globe, called “The World” by Lafuente. It looks okay during the day, but I swear to God… it appears magnificent at night!!! (Too bad that I can only find this small night version picture) Its light shines the globe from the inside making it a beautiful giant blue earth. When I was a kid, I always felt fascinated to pass this fake earth, as it is located in a wealthy district in Jeddah. I could see many royal palaces and massive houses around the suburb. My sister and I used to decide which of those houses belong to me and which of them belong to her. “Oh.. that’s mine! That’s also mine!” Hehehe. Beside this blue globe, there’s another type of giant globe here.

Perhaps the most unusual artwork is this one:

Not only can you find cars being displayed in Jeddah’s roundabouts, but you can also find ships (wooden AND metal), aircrafts, and boats.

Along the side of the famous Corniche Road, there are MANY sculptures being exhibited here. The difference between those that are displayed in the museum is that these works can be visited 24 hours, 7 days a week! Hehehe. There’s not even a single restriction – you can sit on them, touch them, or even kiss them :P. Not only can you enjoy those magnificent works, but you can also see the beautiful beach of the Red Sea and the impressive 312-meter King Fahd’s Fountain. These are SOME (yes, only some) of the sculptures: (HEY! I used to play hide and seek with my sister here!! 😀 )

And there are some more… from different locations:

Notice that there is not even a single statue being displayed in this city (AND all other cities in Saudi Arabia). Why is that? Well, according to the government, Islam prohibits statues and three-dimensional figures of the living creatures. My mom was once ALMOST caught in the airport when she tried to “smuggle” in the wayang puppet made of wood. It’s forbidden. I also saw my brother’s textbooks. Some of them have drawings of human… and all of them have a thin line drawn on the neck. I have no idea why they did that. The situation was even WORST in 1989 when my family and I arrived in Mekkah for the first time. Dad said it’s soooo hard to find a teddy bear (or panda) doll there… as it’s forbidden!!! (And I kept crying coz my doll was stolen 😛 ). But now, you can find many kinds of dolls… no problem! 😀

My Short Trip to Riyadh 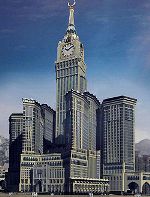 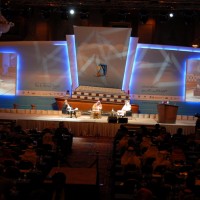