Blogging has been part of my life since 6 years ago. When I started the blog, privacy was not my biggest concern. I just didn't care about it. I was an unknown girl in a virtual world. Nobody would be interested in my crappy stories, I thought. I didn't feel hesitant to write anything I wanted on my blog. I was quite ignorant about it. That's why most of my posts (especially those published in the first 3 years) were very personal. I didn't even remember how personal they were because I never read them anymore (but they can still be read on this site).

But over the years, the number of visitors of this blog increases. The number of people who regularly read my blog also increases. Through some of them, I made new friends. They became not only my virtual friends, but also my "real" friends as we extended our virtual friendship to the "real world" friendship. One thing I learnt from these people was that the world was indeed so small! 🙂

Unfortunately, not everything ran so smoothly. Some people were quite aggressive and demanding in dealing with things. Some were too keen, perhaps. And I had to deal with these kinds of people over the years. As you probably already know, my only point of contact is through this contact form available on this site. That's the only way strangers can contact me. So I totally don't appreciate those strangers who try to find and add me on Facebook (trust me, I have made my profile to be not searchable), add my Yahoo Messenger / MSN ID (I have no idea where they got them!! This is internet, anything is possible…), contact me through my "normal" email address(es), and so on. I just need some space in the virtual world where only the people I know can see it or contact me easily. So please respect my choice.

Why do I write about this in the first place? Well, here comes the story. At the end of 2009, a new reader came to my blog and read one of my posts. I knew he existed because he left a comment on my blog for the first time. Months and weeks passed by, I could see him commenting on few posts of mine. Then followed by a request to add as a friend on Facebook and Yahoo Messenger (which I obviously rejected) and a Facebook message (which I never replied). He sent me several messages afterwards and even sent me some emails to my Yahoo inbox (I never published my Yahoo email in this blog by the way, but this is internet, everything is possible); but I never bothered to reply them. I first thought, by ignoring him, he'd eventually get bored and tired of contacting me. But that's not the case, unfortunately.

A few weeks ago, he added my brother's Yahoo Messenger ID (I had NO FREAKIN IDEA how he got my bro's YM ID!!!). My brother accepted this guy, thinking that he was somebody he knew. But he later learnt that this guy was a stranger to him. My brother was so surprised and angry when the guy revealed many things and chatted with him as if the guy knew him! So he told me about this stranger and I was clearly mad when I knew this! Long story short, I gave a permission to my brother to tell the guy to leave us alone; in which I regretted. It turned out that my brother told some nasty things to him without my knowledge. As a result, I got another Facebook message from this stranger; this time he expressed his shock that my brother said some bad things to him and his apology for sending me many emails and messages. I appreciated the fact that he finally decided to leave us alone.

The Feeling of Losing A Loved One 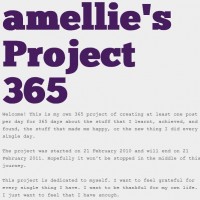