… because backpacking is too mainstream

No. That’s not actually the reason why I decided to do bike touring. The idea of long-distance cycling never crossed my mind before — even though I used to love cycling (on the flat land of the Netherlands, of course!). During all my travels, I met travellers who had been on the road for months, either hitchhiking and/or walking, but somehow I never met any cycle tourers before. It was early this year that I was introduced to this concept by my boyfriend who’s crazy about cycling. In the beginning, I viewed this method of travelling with scepticism. Sure, cycling would save a lot of money, but it’s quite slow to get from point A to B. I only had 18-20 days of annual leave! How could I cycle around the world with the limited days I had?

It was not until I met a British bike tourer, Clive, that my scepticism slowly changed to confidence. Clive had been cycling from Kyrgyzstan all the way to Malaysia. His journey would continue to Singapore, New Zealand, and eventually South America. As a person who had never done this before, his experience was absolutely an eye-opener! He gave me some advice on how to get start with touring and some assurance that anyone, including me, could do it. Nothing is impossible, indeed!

So, on May this year, I decided to give it a try. I started with a relatively “easy” ride from Putrajaya to Port Dickson, on the west coast of Malaysia. The distance between them was “only” 70 kilometres and surprisingly I was able to complete the whole journey without much training. As a newbie, it was not exactly an easy route, to begin with! The hot blazing sun and endless hills made the trip super difficult for me. Despite all that, though, I enjoyed the whole experience. I loved the fact that I was not in a rush — I could stop wherever and whenever I wanted. I was in full control of the trip. I had a choice of going through the roads less travelled or the crowded roads. The settings and scenery changed as I cycle out of the city; cemetery, palm oil plantations, construction site, highway, villages, beach… you name it! I could see so many things in two days! I wish I could do this when I was in Europe. It would have been so much fun!

The ride to Port Dickson was meant as my introduction to cycle touring. Fortunately, it didn’t end there. I have been thinking to extend my cycling trips to other countries, like Iran and Myanmar, where there are still many roads less travelled. Yes, I have been to both countries, but I would like to travel more to the outskirts and villages, where the cultures have not been entirely tainted by modernization and globalisation. It will be super cool to do it!

With ringgit falling to new 17-year low against most currencies in the world (and me having few days of leave this year),  it will be a good time to cycle to a neighbouring country, Thailand. It’s close to Malaysia, ringgit’s value against Thai Bhat isn’t that bad, foods and accommodation are cheap, the scenery is still beautiful albeit touristy… what more can I ask for?

So, here’s the rough plan. We’ll start from Krabi and continue on towards the west coast of the Southern Thailand, passing through the towns of Phang-Nga and Khao Lak. We’ll then cycle back along the west coast to Phuket, before boarding a ferry to Krabi, via Phi Phi Island. As I’m on an extremely tight budget, I hope that I could save more by sleeping in dorms — in exchange for one or two snorkelling trips throughout the trip (driving seems to be out of the budget, unfortunately!).

The total distance of the whole trip is almost 300 kilometres. On average, I’ll cycle around 80-90 kilometres a day. There is not much preparation done in terms of planning and knowing the exact route we’re going to, as Thailand is quite an easy country to travel around with clear road signs and friendly smiling locals who are always willing to help. The route itself isn’t completely fixed — it’s subject to change, depending on weather conditions (and my physical condition?).

As a newcomer to the world of touring, the most important preparation is on the bike itself and its accessories — most importantly pannier bags for my day-to-day stuff, as well as my mental and physical preparation. However, the unhealthy level of haze in Kuala Lumpur, caused by Sumatra’s forest and plantation fires, means that I won’t be able to do many outdoor activities, including training for my cycling trip.

Oh well, let’s just hope that I can do it. Can’t wait for next week 🙂

Next post: Wang Kelian: The Border Crossing to Thailand 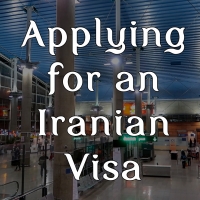 Essential Guide to Applying for an Iranian Visa