An Escape to Tidung Island (Part 2)

After successfully got a good deal for the room, we dropped dead to sleep. We were just tooooo tired! I blamed the World Cup Final for this! 😀 We hadn’t had a good sleep until that afternoon. We were even woken up by a knock on a door and were asked whether we wanted to join for the snorkelling but we refused. We needed a good sleep. Come back tomorrow 😛 .

We woke up at around 2 pm, had the most unexciting lunch full of flies around us, and cycled towards the end of the island to cross the looooong bridge to the other island. Tidung Island, which had a population around 4,000, consisted of two Islands: Tidung Besar and Tidung Kecil. All resident’s houses were located in Tidung Besar (including the one where we stayed) and I was told that there were only government buildings and houses in Tidung Kecil for the purpose of research or something. The two islands were connected by a long long long bridge, which was referred as Love Bridge (Jembatan Cinta) — yeah, right! (I was told the bridge was named by tourists, not by the local people hehe). Unfortunately, when we reached the bridge, the rain was starting to fall, so we decided to wait in a warung tenda nearby. After the rain stopped, we crossed the bridge towards Tidung Kecil island. We were surprisingly welcomed by a scary black cat at the end of the bridge! LOL! He was really scary; kept on meowing and hissing at us and walking towards us! We thought he was really hungry or something because he was so thin and (sorry) ugly. Even after I hushed him and scared him a bit, he didn’t run away. What in the world was wrong with this cat?!, I wondered. But, finally, he disappeared, after few minutes “fighting” with us hahaha!

Just before we stepped on Tidung Kecil, the rain started to fall again 🙁 . So we went back to Tidung Besar. If you want to go there, I suggest bringing your bike along. The island is small but it’ll save a lot of time to ride a bike. You can also bike across the bridge by the way 🙂 . But anyway, I loved the view and the feeling of being there! Awaaaaaay from the crowded and polluted Jakarta! I couldn’t believe it was only 1.5 hours away! It was just so peaceful over there. I miss it already.

In the evening, there was nothing much to do on the island. The island was just small; you couldn’t find any luxury stuff (like resorts) — everything was run by the locals. And that made it so special 🙂 and cheap! We sat down on a terrace with a man who was responsible for the snorkelling of the Hasbi Group, the family company in which the house we stayed at (sorry, I forgot his name 🙁 , let’s just refer him as Mr. B). He used to be a fisherman who had conquered the seas around our country: Java Sea, Banda Sea, and the Arafura Sea near the Papua. Phew, this man was just amazing! He had seen most of the corals and thought that the corals around Thousands Islands were as beautiful as the others (no comment on this :P). He said he didn’t want to go to university because apparently most of the people who lived on the island ended up doing something with the sea or tourism-related work. After he was done with fishing, he decided to open a tourism company with his family called Hasbi Group, which offered snorkelling, bikes, and accommodation.

Mr. B talked about a lot of things, including about his experience being a fisherman. He told me that he usually got 1 million Rupiah a month from the fishing. The fishes were sold to a company in Jakarta which was then exported to Singapore. I asked him what happened with the corals between Tidung Besar and Tidung Kecil. They were all dead! He said the corals were still there when he was still young but they were destroyed — most probably by the potassium cyanide used by fishermen to catch the fish 🙁 . He also talked a little bit about the island, how they had an emergency boat in case somebody was critically ill as they only had a puskesmas (a clinic) there. The only SMK there (a high school-like) also got two boats for the students! 😀 How cool, huh? People there also knew each other, it’s a small community — I even saw a teenage couple dating overlooking the beach… so romantic hihihi! I also asked him about all these trash around the island and unfortunately, most of them came from Jakarta 🙁 . Damn, I feel so shameful for coming from that city. Is there anything I can be proud of Jakarta, by the way? The people of Tidung cleaned up the shore every day but the trash kept on coming. How sad! Anyhow, Tidung Island got a small waste management system, but it was written on the harbour that we — the visitor — needed to bring back our own garbage. It was a really nice talk with Mr. B! He was really nice and until the end of our stay in Tidung Island, he had been helping us 🙂 . Thank youuu!

We woke up early in the morning the next day for snorkelling. Some people wanted to join us so that we could split up the price for the boat, but they were 1 hour LATE! We couldn’t wait any longer so we just left them behind at around 7 am. Glad we did it! The cost of renting the boat was Rp. 250,000 and I think it could fit at least 8 people. The snorkelling equipment was rented for Rp. 35,000 (but we got a discount of 5,000 each… wohooo!). So, only me, Jessie, and Mr. B were on the boat! It felt SOOOO GOOOOOOOD!!!!! I could scream like crazy in the middle of the sea! Wohoooo! LOL! That’s the time when I began to become in love with the sea. I admit I am not a beach or sea person. For me, the sea is just too sticky and salty. I’d prefer mountains and lakes. But now I begin to love it! The sky was so blue. The sea was blue. It was windy. Everything seemed perfect. It was luxurious! I felt like I was in my private luxurious boat! Hahaha!

We went to three different spots for snorkeling — we didn’t have much time. We had to be back in Tidung by 10am to buy the ticket to go back to Jakarta. It was the first snorkeling experience for me and Jessie! We loved it! The corals were not as colorful as the ones we saw on TV, of course (and we couldn’t go to the better ones as it’s quite far from our place), buuuuttt it felt just marvelous to see the marine life by our own eyes! Colorful fishes in different shapes… A M A Z I N G! We were very excited and felt like we have conquered the sea! Hahaha! Well, we did feel like it until Jessie was stung by a small jellyfish in the second spot. This reminded me of one of the episodes of Friends where Monica was stung by a jellyfish and Chandler had to pee on her! LOL! But good thing it wasn’t that bad 😛 . Mr. B joke that the jellyfishes saw a bule coming and thought to introduce themselves. Hehehe.

We reached Tidung Island around 9am, quickly took a shower (not exactly a shower actually hihi) and changed our clothes. We waited for the ticket queue at around 10am. Our bags had been queued just before we left for snorkeling. So the employee just pointed to our bags and we bought the ticket from him. It was simple and there were no name calling anymore (hff). Half way to Jakarta, we could already see the trashes and garbage again and the blue sea turned black again…, which pissed me off. Damn, Jakarta! 🙁 If only I could do something to clean these up!

Overall, I loved this short trip! Finally, I could escape from the crowds and pollution! It was memorable and it made me want to explore mooooore! Jessie and I were going to have another trip around Indonesia next year, Insya Allah. Can’t wait! 🙂 (Yes, now I have a traveling buddy!)

The breakdown of the costs is as follows (since some of you ask about it):

These prices can be MUCH cheaper if you go there with more people! You can save so much on the boat and accommodation costs since you can divide the price with the people that come along 🙂

* More photos on my Picasa 🙂 (We didn’t take that many pictures, sorry) 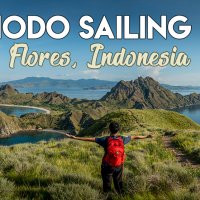